Disco style was born in the 70s. During the time, this high-energy music was really in vogue. To celebrate the music wave, people started wearing particular clothing when going to a club for dancing with disco music. Since then, disco style clothing became very popular both among women or men. Women wore twirling skirts teamed with body-fitted dresses. What about men? Just like women, fashion disco style for men also developed very fast. They appeared in clubs wearing unbuttoned shirts paired with bell-bottomed pants. To enhance their look, shiny shoes and big jewelries are worn. This style was actually inspired by Hippy fashion from the 60s. If you have ever seen Annie Hall, a popular movie released in 1977, you must be familiar with disco era fashion. But the movie mostly shows disco clothing for women. What about men clothing in disco era? Let’s find out below. 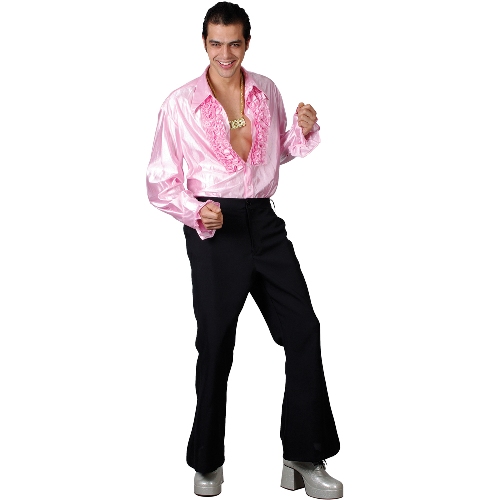 When we talk about disco style clothing for men, we should not forget leisure suits. These suits are very big. They were worn with a kind of bush jacket, a jacket with large buttons and several flap pockets. It also had big lapels. The jacket was worn over matching bell-bottom pants. This outfit started becoming very popular in the late of 1970s when it was introduced by John Travolta in his movie “Saturday Night Fever”. If you are a fan of John Travolta, you must have watched this movie. Sometimes men wore a collared shirt underneath the suits to make the look more casual. The collar was placed outside the jacket. The suits typically have bright colors. The prominent style for men in a disco era was also the bell-bottomed pants. They are called so because the bottom of the pants is wide while they have slim-fitting at the top. Before these pants gained popularity as a part of disco clothing style, they were previously used as part of naval uniforms.

Jewelry cannot be separated from disco style clothing. Men often wore a heavy and big gold chain to enhance the disco look. This chain can be made of any materials. Shoes are also a part of fashion. In the 70s, during the disco era, platform shoes are a part of the most popular fashion staple for men. Now, people don’t wear this disco clothing style anymore. They are just worn for themed parties. If you are invited for a party with disco theme, you should dress up in this style. You can find those clothes in specialty stores.

Previous: Plus Size Dresses for Women Cocktail: Shopping Tips
Next: Ripped Jeans for Women: Making Use of Your Old Jeans

The Check Trend is Now in!

Wedding Coat for Men: Tips to Select the Best One